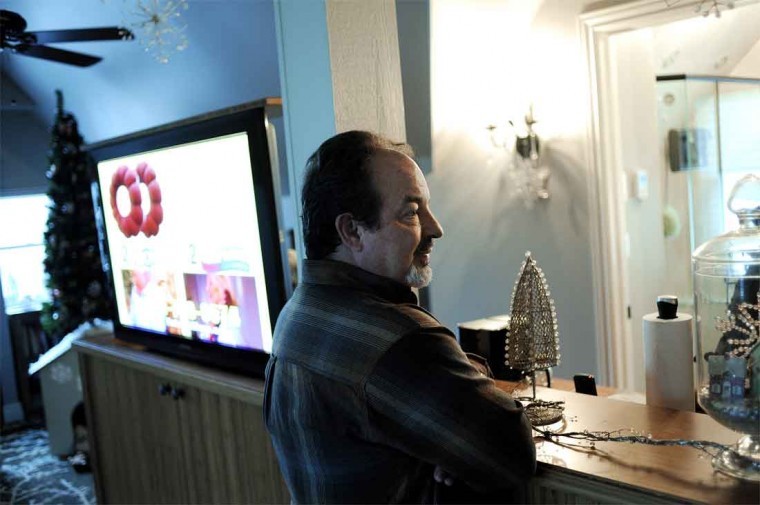 For Joe and Alexandra Rutkiewicz, the renovation of their 120-year-old house was the perfect opportunity to go hi-tech.

From an audio system throughout the house to a 200-CD music collection that can be accessed from a television screen, the revamped home has all the bells and whistles a media-lover could want.

One audio system pumps music to the kitchen, dining room, front porch and back patio. Separate surround sound systems are located in the living room and in the third floor master suite, which also includes a speaker for the bathroom.

With their entire collection of CDs — from jazz to classic rock — downloaded into a computer system, the Rutkiewicz’s can manage their music, adding or deleting songs or creating a personalized playlist. Or they can browse through their collection on the big-screen TV, choosing what they want to listen to while sitting on the living room couch.

“It’s basically like having your own juke box,” said Doug Harbert, owner of Harbert Home Systems. Harbert custom designed and installed the entire audio-video system. Harbert’s business, which is run out of his home, can be found online at www.harberthomesystems.com.

An electrician by trade, Harbert started the business about five years ago. Since then he’s been installing about 50 custom audio-video systems per year.

Everything in the house is connected via an online network, so the Rutkiewicz’s can browse You Tube, Netflix, their Blockbuster account or anything else they care to look at through any computer or on any of the five television screens in the house.

“If you think about it, there’s unlimited content online, so they have access to all of that,” Harbert said.

And one universal remote controls it all. Everything in the Rutkiewicz house is programmed into the MX 3000 universal remote — iPod players, XM Radio system, blu-ray players, AT & T U-verse and more. Touch an icon on the screen for the room you’re in, then touch another for what it is you want to access and it’s all there.

“I have an MP3 player with a million songs on it,” said Joe Rutkiewicz, who jokes that the only thing missing on the remote is a clip to hook it to your belt.

The Rutkiewicz house was renovated about one year ago, with a galley kitchen that was made bigger and an attic that was converted to the master suite.

Harbert prefers to use wiring in the systems he installs, saying it is more dependable than wireless. While construction was going on in the Rutkiewicz house was a good time to add the audio and surround sound systems, which include hard-wired speakers throughout the house.

All of the source components — Blu-Ray players, servers, iPod docking stations — are hidden away in custom designed furniture and in a built-in wall cabinet between the kitchen and dining area.

Rutkiewicz is the owner of Designtech Custom Interiors in Freeland, which manufactures custom designed furniture and cabinetry.

In the master suite a custom-made unit contains a wine cabinet and small sink, as well as shelves to hide away all of the electronic equipment and a small slot to conceal a television screen that glides up for viewing via remote control.

A Nintendo Wii gaming system is hooked up to the master suite TV and everything there is also programmed into a universal remote.

“We strived to make this system as invisible as possible,” Harbert said.

The master suite also has access to a music system, Sirus/XM Radio, U-verse and other programs.

“It’s a little bit of overkill, but there are times when you go, ‘That’s very cool,’” Rutkiewicz said.

Harbert said he can also program other things in a home to be operated while a homeowner is away via a laptop computer, an iPad or even an iPhone, such as lights, window treatments, heating and cooling systems or video security cameras.

And now homebuilders are beginning to get in the act by “future proofing” homes for electronics, Harbert said. New homes under construction offer a great opportunity to run all the wires that may be needed for the latest hi-tech gadgets, as well as those that are sure to come, he said.

“People are getting more sophisticated with what they want done,” Rutkiewicz said. “They don’t just want to put a TV on a stand.”

Harbert prides himself on making his systems easy-to-use and functional.

“It’s all useless if you don’t know how to use it,” he said.